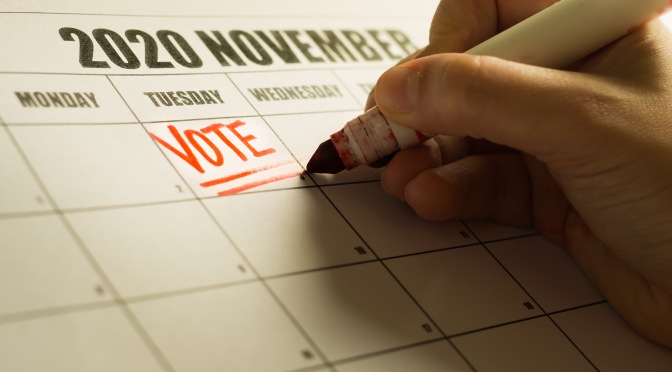 Our Old Testament Scripture reading comes from Psalm 146. We read the first two verses as our Call to Worship. Listen again to those verses and the ones that follow. Listen for God’s Word. Read Psalm 146.

In the New Testament, we turn to a scene in Matthew. Last week we talked about our baptismal questions: “Is Jesus Christ your Lord and Savior? Do you trust him?” In our text today, Jesus asks the disciples a similar question. Listen again for God’s Word from Matthew Chapter 16, verses 13-20. Read Matthew 16:13-20. This is the Word of the Lord. Thanks be to God.

When my friend made that Facebook post, she wasn’t making a political statement. “Jesus is Lord. Live like it” could be said any day, any week, any year.

But perhaps the time when we most need to be reminded of that great truth is the week of an election, such as this week.

Back in July I listened to the sermon that same friend preached on November 13, 2016, the first Sunday after the election. At one point I had to pause the podcast to make sure I had clicked on the right sermon and that I hadn’t accidentally clicked on a sermon from 2020. Because the way she was describing the state of things in 2016 sounded remarkably similar to how one might describe the state of things today. Political division. Racial tension. Economic disparities. Healthcare struggles. Disease. Poverty. And so on. And so on.

Of course, this year we might put it differently: The more things change, the more it seems nothing is the same anymore.

Scripture would put it differently still. Scripture would say to us: The more things change, the more we need to remind ourselves of the one thing that will always be the same

Peter is one of my favorite disciples. Why? Because I can relate to Peter a lot. Like me, Peter suffers from foot-in-mouth disease. Anyone else suffer from that disease? You open your mouth and somehow immediately insert your foot? Peter was famous for blurting out answers to questions, no matter how rash or ridiculous they were.

Every now and then, Peter got it right.

Jesus asked Peter one of the most important questions of life, “Who do you say that I am?” Peter answered, “You are the Messiah, the Son of the Living God.” I can almost imagine Jesus looking at him and smiling, like, “Yes! You’re catching on!”

Jesus could have held this teaching moment in the quiet sanctuary of the Temple or in the privacy of a boat in the middle of the water or in an upper room away from the crowd – all places where he had taught the disciples many times before. Instead, he intentionally chose to have this conversation in Caesarea Philippi.

For years Caesarea Philippi was a Canaanite site for the worship of Baal. When Herod the Great conquered the city, he turned it into a different place of worship, building a temple for Caesar Augustus, a Roman emperor whose preferred title wasn’t emperor, but rather the Greek title for a divine leader. Caesar Augustus’ preferred title wasn’t emperor: it was son of god.

In this place where people had worshipped the gods of their culture for centuries, in the shadow of the temple of the emperor who called himself the son of god, Peter professed his faith in another Son of God, the true Son of God.

On the surface, Peter’s confession may sound like just good ol’ polite church talk. It sounds a lot like some of the creeds we often say in worship.

But when spoken in this location, it’s a bold, courageous statement.

Caesarea Philippi was a bold, courageous place – a risky place – for Peter to call Jesus the Messiah. To go against the culture of his day usually came at a high price. Yet that’s exactly where Jesus calls his disciples to go and speak this truth.

Maybe that Caesarea Philippi for us is the comfort of our churches, when it’s tempting to do things the way we’ve always done them, instead of hearing a fresh call from the Lord.

We all have our own Caesarea Philippiss today, those places where Jesus calls us to declare he is Lord in a world that tempts us to believe otherwise.

This Tuesday is a chance for us to declare that Jesus is Lord and to choose to live like it.

The church isn’t immune to that temptation. The world has heard for too long what the church is against. It’s time we spoke about who and what we are for.

A frequent prayer request shared during our Facebook Live worship services recently has been a prayer for healing and unity for our nation that is divided in so many ways. That healing and unity comes by declaring who we are for, and this Tuesday is our chance to make that declaration.

Many people are heading into this week with a lot of anticipation, maybe even some fear and uncertainty. Some people, maybe even some of us, are putting a lot of hope and faith in certain candidates, hoping their election will bring some of that healing and unity for which we’ve been praying.

If we are putting all of our hope and faith in a political candidate or party, Scripture has a word for that, and that word is idolatry.

Does that mean we shouldn’t even bother with voting? Of course not! We’ve been given the freedom to vote. God calls us to be good and faithful citizens of our nation, even while we remember our true citizenship is in heaven. God calls us to pray for our leaders – all of our leaders – whether we voted for them or not. Scripture is clear about that.

But Scripture is equally clear that we aren’t to put our trust in princes or mortals. There is only one Messiah, only one son of God. It’s not Caesar Augustus. It’s not Donald Trump or Joe Biden or any other candidate.

There is only one son of God, and his name is Jesus. Jesus alone is Lord.

And because he is Lord, we are free to live like it.

Because we know who alone is Lord, we can go into this week with confidence, even boldness. No matter what happens on Tuesday, we know Jesus still sits on the throne. No matter what we face at school or work, we know God’s got us in the palm of his hand and that God’s got a plan. No matter if our holidays aren’t quite the same this year, we know Jesus Christ is the same yesterday, today, and forever. No matter what the rest of this crazy 2020 year brings, still we can say through faith it is the year of our Lord.

“Jesus is Lord. Live like it,” said my friend.

The question is not whether Jesus is Lord. He is.

“…And let us run with perseverance the race marked out for us, fixing our eyes on Jesus, the pioneer and perfecter of faith.”
- Hebrews 12:1-2
%d bloggers like this: