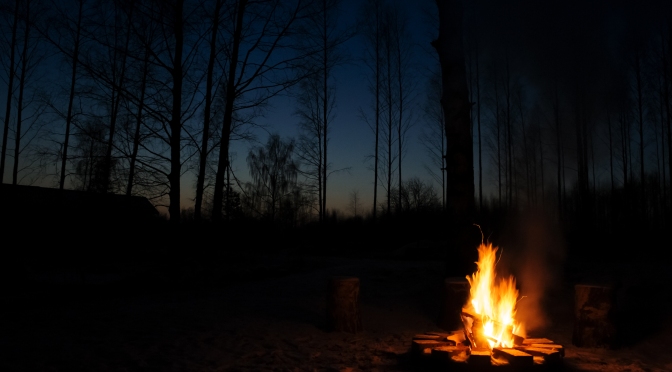 On Sunday mornings during this season of Lent, we’ve been considering questions of Jesus’ last week. Up ‘til now, we’ve looked at questions asked of Jesus either by the disciples or Pilate. Tonight we turn to a question asked of one of the disciples when Jesus wasn’t with them – or, more to the point, when they weren’t with him.

Hours before this scene we’ll read in a moment, Peter, along with James and John, had been with Jesus praying in the Garden of Gethsemane when suddenly Judas appeared and betrayed Jesus, just as Jesus had predicted. And just as he also predicted, he was arrested, and all of the disciples deserted him. In our text tonight, Peter will be reminded of yet another one of Jesus’ predictions. Listen for God’s Word from the Gospel of John Chapter 18, beginning with verse 15. Read John 18:15-18, 25-27.

When we overhear statements made about us or to us, we sometimes are quick to respond in kind. Lord knows Peter was known for kneejerk responses, like when Jesus asked the disciples, “Who do you say that I am?” Peter immediately replied, “You are the Messiah, the Son of the Living God.” Or when at supper that fateful night when Jesus told Peter, “This very night you will deny me three times,” Peter immediately replied, “Even if I have to die with you, I will never deny you.”

But a question demands a response: “You’re not one of his disciples, are you?” Yes or no?

We all have those times when we’re eager to say we’re one of his disciples, and we all have those times when we’re a little less eager. Back in the day when it was the popular thing to put a fish symbol on the back of your car, I admittedly didn’t because, well, let’s be honest, when I’m sitting in traffic on I-75, and my foot gets a little heavy, and my patience gets a little light, I might not want people to know, yes, I’m one of his disciples.

Peter was likely feeling all four. He was likely hungry. It was around midnight or later by this time. Even a big meal like the Passover feast they’d just enjoyed would have been long gone by now. He was likely angry. Angry at the soldiers who arrested Jesus. Angry at Judas who betrayed him, thinking, “You mess with my mentor, you mess with me.” He was likely lonely. His friends had all scattered. The one friend who had been with him had since gone into the courtyard with Jesus, leaving Peter standing alone by the fire. And he was most definitely tired. Physically. Emotionally. Spiritually.

Faced with that choice, Peter chose to save his own skin rather than profess his allegiance to Christ. It was something he imagined he’d never do, something he even insisted he’d never do. When the cock crowed just as Jesus predicted, I imagine Peter winced, as he realized Jesus knew him better than he knew himself. Now he’d turned his back on the one who knew him best.

It was his darkest night of the soul.

Yet sometimes healing begins during the darkest part of the night. The rooster crowed, Peter wept, and the road to healing began.

A few weeks later, and a few chapters later, in John Chapter 21, John tells us about another healing step in Peter’s journey when Peter found himself once again standing around a charcoal fire.

As many of us know and have experienced, the sense of smell has great power to awaken memories. The aroma of a certain cologne or perfume. The smell of a favorite family dish. And suddenly are these memories flood our minds.

Charcoal fires have a particular smell to them. Much like probably any rooster crow he’d heard since that night, the smell of charcoal likely called up for Peter the memory of that awful, awful night. He’d tried to forget his denial. He’d hoped Jesus had forgotten it also.

But try as he might, the memory came back – and as it turned out, that was a good thing – because around that second fire, Peter learned that healing comes, not from trying to bury our past, but by exposing it to the light – and allowing Jesus to redeem it.

Peter hadn’t forgotten that painful night, and neither had Jesus – and as it turned out, that also was a good thing. Jesus knew exactly what question Peter needed to be asked this time around to help him heal and move past the way he responded to that earlier question. “Do you love me?” Jesus asked.

In our English translation, it’s the same question every time. In the original language, the third time is actually a different question. The word translated “love” in the first two questions is agape. Agape is that perfect, unconditional love, the way God loves us. The word translated “love” in the third question is philia. Philia is that brotherly or sisterly love, the love shared between friends, the way we humans love…genuinely…yet imperfectly and conditionally.

Jesus does know everything. He knows us better than we know ourselves. He knows us. He gets us. He gets that there will be those moments when we like Peter will confess with bold confidence, “You are the Messiah. Am I one of your disciples? Yes. Absolutely.” He also knows there will be those times when we betray him, desert him, and deny him. “You’re not one of his disciples, are you? No, I am not.”

Jesus knows everything about us. And the good news? He still loves us.

But there’s more good news. Not only does Jesus still love us, but he gives us a purpose.  Each time Peter responded to Jesus’ question, “Yes, Lord, you know that I love you,” Jesus responded, “Feed my sheep.” If Peter’s words of denial “I don’t know him” were unimaginable words to Peter, Jesus’ words “feed my sheep” were equally unimaginable – the one portraying the depth of our sin, the other the depth of God’s mercy.

We may think all of our failures are permanent. Jesus says, “No, they’re not. Your present situation is not your permanent destination. I have a greater purpose for you: Go feed my sheep.”

If ever there were a sign of God’s love and purpose for us, it’s this meal we remember tonight. Even though he knew how the disciples would fail him, Jesus set a place for them at the table. Even though he knew they would never be able to love him as fully in return, Jesus showed them the fullness of his love: “This is my body given for you and my blood shed for you.”

Tonight as you come to the table, as you tear off a piece of the bread and dip it in the cup, remember his love for you. Remember also what Peter discovered: that God can use you, despite your past…maybe even because of it…if you offer your past to him and trust in his redemption.

May we come to the table, may we remember, and may we discover that grace.

One thought on “You’re Not One Of His Disciples, Are You?”

Join 62 other followers
Follow With Eyes of Faith on WordPress.com

“…And let us run with perseverance the race marked out for us, fixing our eyes on Jesus, the pioneer and perfecter of faith.”
- Hebrews 12:1-2
%d bloggers like this: